Call Now
Get In Touch

Agent tanks are available in two sizes with diameters of just 10 inches, making confined space storage an easy endeavor. Tanks are charged in increments of two pounds in a small tank and three pounds in a larger tank.

The system is designed with three types of nozzles (corner, side wall, and center room) to protect areas of all shapes and sizes. To ensure full 24/7 protection, the clean-agent system is monitored by an electrical control panel that has an automatic battery backup in the event of a power failure. 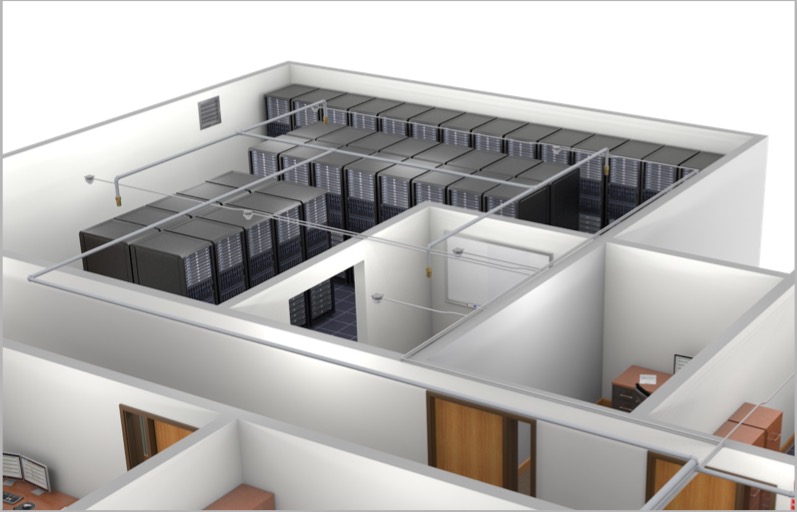 The extinguishing agent FM-200 (heptafluoropropane CF3CH-FCF3) is identified in NFPA 2001 as HFC-227ea. It was developed as an environmentally safe alternative to Halon 1301 and is intended to prevent business interruption due to the risk of fire and to prevent the loss of irreplaceable, highly valuable assets from fire.

The FM-200 agent is listed as acceptable for use in occupied spaces in accordance with the U.S. Environmental Protection Agency’s (EPA) Significant New Alternatives Policy (SNAP). It also meets the NFPA 2001’s standard on clean agent fire extinguishing systems with exposure limits of five minutes for design concentrations up to 10.5%.

FM-200 (HFC-227ea) provides heat absorption as a means of extinguishment, absorbing heat at a molecular level that is faster than the amount of heat generated by the combustion reaction, ceasing the combustion reaction altogether. In addition to its heat absorption properties, it has a chemical contribution to flame extinguishment which arises from the thermal decomposition of small amounts of the agent in the flames. 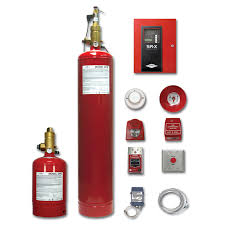 Tanks are available in two sizes, each 10” in diameter. They are charged with FM-200 or 3M Novec 1230 in increments of two pounds in small tanks or three pounds in larger tanks, available in agent weights of 16-44 lbs. They are pressurized to 360 psi at 350 degrees Fahrenheit. Each tank comes standard with a factory installed low pressure switch to monitor the condition of your tanks, signaling the release panel if pressure drops below 285 psi.

Discharge valves are composed of brass and stainless steel with rubber seals and the system utilizes mechanical and electrical actuators for discharge. Six tanks can be simultaneously actuated using pneumatic actuators. A dual outlet valve provides the capability to protect two rooms of different sizes or or a room and under floor with a single tank.

The alarming device, consisting of audible and visual fire condition indication, uses a system of a bell and horn strobe to signal the start of the release time delay.

All cable assemblies are used on all circuits, except for the release circuit, which uses a four-conductor plenum rated cable type CMP, which complies with the NFPA 70 Article 760 for use on power limited fire alarm circuits. Each of the four conductors is composed of stranded 18 AWG copper with extruded insulation covered with an aluminum shield and a white Mylar outer jacket.

The non-power limited release circuit and cable assembly complies with the NFPA 70 Article 760 for use on non-power limited fire alarm circuits. The two-conductor cable assembly is rated for 600 volts, with each conductor stranded with 18 AWG copper with flame-retardant PVC insulation and an aluminum/polyester shield to cover the pair. The black outer jacket is flame-retardant with a temperature rating of 90 degrees Celsius.

Release circuit cables must be run in their own conduit/raceway because of their non-power limits. Each device and cable assembly includes four position, keyed, locking connectors which are Molex® brand Mini-Fit Jr.® model. The plug and receptacle housing have a UL flammability rating of 94V-0. The gold plated terminals reduce oxidation contamination, providing strong electrical connections for the low-voltage/low-current circuits of the releasing panel.

The discharge pressure switch is designed to send a signal to the releasing panel when a valve has been opened. It serves as an initiating device by sending a signal to secure the protected roof if the valve has been operated manually by the manual local actuator. This switch comes with a pre-installed wire harness for connection to the panel using a junction box harness and cable assemblies.

Two-and four-orifice nozzles have their orifices on 90 degree centers.

We Are Your Dedicated Fire Protection Company Serving Arkansas & Oklahoma

Protect Life and Property with Universal Fire Equipment by Your Side. Control is the key to success.
We bring you experience, knowledge, dedication, diligence and integrity.